When there is no more room in hell, the dead will walk the earth. 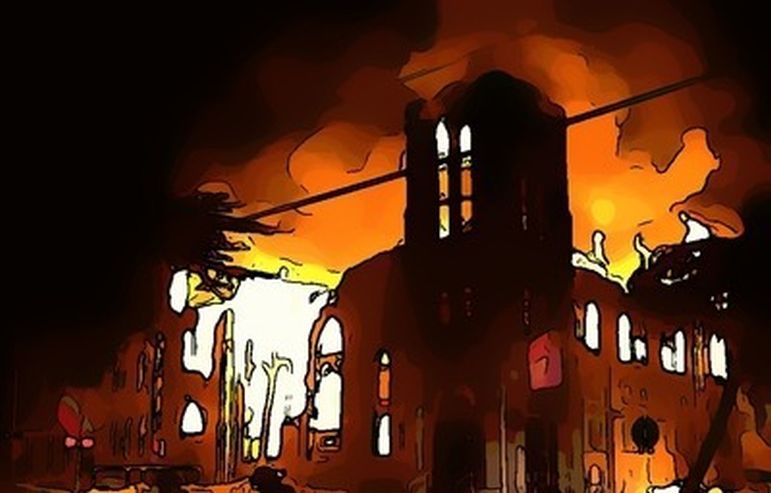 Josh watches as the city burns. For the last hour, as The Tower of the Americas made its slow revolution, he watched as the entire city appears ablaze. He has been holed-up in this perch for nearly a week; his food has quickly dwindled, and worse, he is almost out of brandy. The looters have disappeared replaced by the shambling bodies of the dead. Tomorrow; that’s when he’ll head out into the city to find supplies, maybe a car. At least for one last night he won’t have to worry about dealing with those abominations roaming the streets of River City.

Phil awoke to the sound of moans coming from the the cell next door. Officer Rodriguez was bit the night before and the two decided to lock themselves in cells to sleep. Rodriguez didn’t make through the night. Seeing Phil stir, officer Rodriguez starts making a weird barking noise and clawing through the bars.

“Damn it Rod, I told you not to check that waitress. Now I have to put you down.” Phil checks his revolver and finds he only has 5 rounds left. The number of rounds they went through still amazes him. He hasn’t seen any of the other officers in the last 3 days and the fires last night was a bad sign for the city. Loading the last of his supplies into a backpack, Phil spins the cylinder on his pistol on his revolver and heads out into the morning to find survivors.

Doug stands on top of a car looking down both directions down Commerce street. A small hoard of shamblers are coming down the street towards him. He would mow them all down if he hadn’t been so liberal with his Uzis three days ago. Now he has to try to avoid the shamblers in order to scavenge enough to scrape by. River Center Mall looks like a good place to hide out, but he can’t get that Romero film out of his head. He needs to find some backup before he risks trapping himself in a potential shambler magnet.

Wanda looks up at the sun as she systematically cleans off her knife on some dead guys shirt. She still wears her uniform from a week ago and it has been splattered with blood in several spot. She found a patch on a walking corpes and whip-stitched onto her shirt after killing him. Now her shirt proudly reads International House of PAIN. Her roller-blades hung around her neck and she debates putting them on. Three years as a car hop for Sonic and five years in roller derby has made her blades an extension of herself. Even though, Wanda knew she will have to find others to help her out of the city.

I'm sorry, but we no longer support this web browser. Please upgrade your browser or install Chrome or Firefox to enjoy the full functionality of this site.